So I wrote a short story for my mom on Mother’s day a couple of days ago. The story was about a night with my stepdad. Years ago. I feel like my stepdad abused me and, on top of that, I perceived the abuse to be sexual in nature.

I still do. But many people, especially older women (who’ve experienced their own sexual abuse), have been trying to shame me for talking about my experience. For using the words I do. Offensive language. Awkward, sometimes graphic descriptions.

In this post, I want you to start thinking about GateKeepers. People who exclude others from something that’s rightfully theirs. In my case, both my mother and her friend named Rose tried to shut me out from my own pain. They’re pretty good at telling me that I’m an abuser. Not someone who’s been abused. That’s what my mom and Rose are. Abuse survivors. Not me though. I’m just a boy. I don’t get to pass through their door of approval.

Well. Let’s talk about this, To start with, I want to bring up a comment I wrote on LinkedIn recently (I know right? but I’m looking for a job) in response to an article someone had posted:

Now, I know it’s snarky and just what this person was talking about, but I think there’s more to this concept. In all honesty. Yes, if you insult a person, they usually stop listening to you. But how are you supposed to know what’s insulting or not? One person’s joke is another person’s denigration (that’s usually how jokes work). But what would happen to the truth if we pared it down. Whittled away the contextual meanings that give your feedback or complaint the exact description you need to get a particular job done (or problem fixed)?

What I see these people clamoring for is silence. They don’t want to hear ANY criticism, and if you do dare to give any, it had better be well edited before it comes out of your mouth. You need to be polite with assholes, you know.

My comment got 2 likes, while all the other theoretical minds on LinkedIn sided with the idea that you shouldn’t be completely honest with people. Otherwise, it’s just not civil. Meanwhile, I was seething and distressed that nobody in my family had responded to my phone calls or texts. Wondering if they were mad I went public with my abuse, or were mad how I had painted my mom out to be. I was way off.

Nobody was reading anything! Particularly, my mother. She sent me an email that basically reads like a resignation letter. Except she’s quitting as my mom. Or did she fire me as her son? I can’t tell. She titled her email to me “Why Radio Silence?”

Is this how families are supposed to treat the abuse survivors in their families? Or am I misreading this?

They probably don’t think I have anything to whinge about (is more than likely). I’m not allowed to feel the way that I do, because I’m 42, and this all happened when I was 15. Besides. I’m a boy. What my stepdad did with me is just how guys show affection with each other. He was just playing around with me, and I just took it the wrong way. That’s what my mom had been telling me for years. Maybe she’s right.

Course. I could be blowing this up again. You could look at my mom’s email (where she quits) as a sweet letter. She’s letting me know that I’m free now, to go off on my journey. All my pain gets to wash away with her as she abandons my life.

Luckily for me, I still had the phone number of my mom’s friend Rose. If you haven’t read my Mother’s day short story, then let me just tell you, that after I kicked my mom out of my house, my mom had her friend Rose shame-text me for being such a bad son. Back then, I wondered how Rose even got my phone number, but now I know that my mom had given it to her.

Last night, when I couldn’t get my mom to talk to me, I decided to send Rose a link to my short story. I wanted her to have to read what my stepdad did to me. I wanted her to feel bad for how her insensitive texts (her righteous fervor) had made me want to kill myself.

I had to respond. I had no one else to talk to. 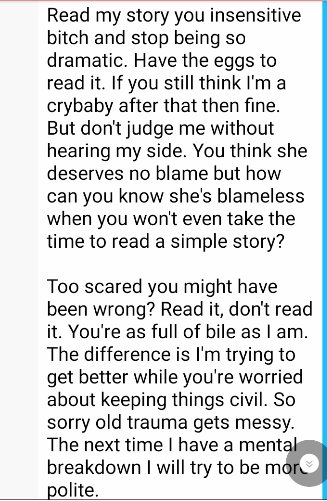 Rose was kind enough to keep talking to me.

People like Rose. Like my mom. They like to hide behind how weak women are. Men are so strong! It’s not fair to women that men can intimidate them with their bodies. Men are nothing but destructive assholes. Women need to protect each other from men. Even from men who have been abused by other men. Because they’re abusers too. Not human. Just more men. She went on:

At this point, I think Rose smelled blood, so she texted in glee:

In all of this chaos, I was starting to realize I was talking to my mother. Not Rose. She was being the mother I needed right now. So I replied to her:

I was starting to regret this, but I couldn’t stop myself either. I started to get a little weird with her. Besides. Was she complaining about getting texts out of nowhere?

I’ll admit. I was being creepy on purpose. You can judge me how you want, but I think it points out how women like Rose and my mom operate. All drama. But only for themselves. They love it when men hand them the cliché they’ve been looking for.

I’ll end this post here. That’s where the texts with Rose ended anyway. It’s where I let go of my mother for good.

I should have stopped a while ago. Probably shouldn’t have posted this at all. You see. If you look around. People tell you to not do what I’m doing.

“Don’t use your blog to air your traumas.”

“Don’t use the internet to drag other people through the mud.”

Be polite or else people won’t listen to you. Won’t support you if you’re too honest. You’re being too brutal. People feel mothers have taken enough shit over the years, that it isn’t nice to pile more complaints on them. Especially on Mother’s Day. That’s not nice.

But who says all this? Does it even make sense. Am I cruel? Or is my mom? Is Rose?

I guess we’re all cruel. In our own, damaged way. All of us throwing tantrums, just so we can be heard. Being a dad has caused me to think about more than just my own family and my solitary life. I think about all the generations that came before me and all the possible branches of my family tree that stretch off into infinity in our future. What are we really doing on this planet? Why do we have kids? Why do we have to honor our parents unconditionally? Why does nobody talk about how we’re killing our kids and our grandkids (and their children) in the future by the way we’re living today. We’re all bad parents in the way we’re destroying the planet. Poisoning our kids.

Sorry for the depressed post, but this is just how life is. I don’t really care if Rose and my mom judge me the way they do. I stopped caring last night. They also won’t shut me up, but they’re going to eventually hear my stories. And I’m going to start cleaning shit up! Whether anyone likes it or not. This world is a mess and I’m not going to leave it this way for my kids. The way Baby Boomers, like Rose and my mom, have. It’s just not good enough for my boys! Not good enough for me.

My mother, unfortunately, is not good enough for me either. Bye mom. Have a nice journey. Sorry for being so honest.