I wanted to write something for Teacher Appreciation Week:

You have no idea (or probably you do) how much you’ve done for my son Skander. You might remember he had to miss school recently, when I had to take him to the dentist to have a baby tooth pulled. Back home, while his mouth was numb from injections (and he was drooling everywhere), it started feeling like those days he didn’t talk. We’d moved to Springfield when Skander was 4, and even as old as 5, he was still doing a lot of those “da da da” sounds.

But that’s years ago. Early Childhood tested Skander up on College St. when we first moved here, and Skander started kindergarten at Mark Twain with an IEP for his speech disability. It’s been so long ago it gets hard to remember what it was like to not understand him. But, after coming home from the dentist last week, I asked him if he needed anything, and we both started laughing when he said, “Muh nhhh ta ha.” I’m not being dramatic when I say it brought up old trauma with the kid. But then the most amazing thing happened: He started writing on a pad of paper what he wanted to eat!

I know a lot of people like to give awards to teachers: instead of actually finding a way to make teaching a lucrative career. I don’t have the power to do anything about that, and I don’t want to insult you with a meaningless ‘thank you’ either. I’m a veteran; so I know how that feels. I just wanted to say that I don’t know if you’re the best teacher in the world, but I do know that I couldn’t have gotten through the last 2 years without you.

And it’s not just because of Skander’s special needs. It’s Covid, and all the worries that it brought with it. I can remember how crazy it was when I started working from home early this year, (due to the fact my coworkers at Grizzly Industrial wouldn’t wear masks) and I was too worried about my mom’s life to try arguing with them. Even though the pandemic made me feel like I wasn’t in Kansas anymore (and all alone), Skander was at home with me. And you were there too! And we all tried, badly, to figure out how to make Zoom work, and we all tried to make it through the curtain.

I was doing my taxes this last January, hoping Biden would pass the stimulus he promised, and the TurboTax AI kept asking me if I bought supplies for my classrooms.

I couldn’t help thinking, “Why do teachers buy supplies for their classes?!”

I wouldn’t even bring doughnuts to my last job. Though I’ll admit they paid me a lot less than a public school teacher, while I expertly sold their expensive machines. This last February, Grizzly eventually had me listen to a recording of a customer who was urging me to go pick up my son from school at the end of my shift. I tried to tell him I couldn’t leave and had to continue taking his long order, even though that would have made me late. “It’s important” he’d said. That didn’t change the fact that I got a final warning for doing what he told me to (but I know now that he shouldn’t have had to tell me). In any case, I don’t work there anymore, and I’m not sure if I’ll find a job in time to make sure Skander and his brother go to Twain next year. But I wanted you to know that I understand what working for an employer who doesn’t pay you enough feels like.

But let’s get back to teachers appreciation week! And congratulations for getting a whole week, by the way! Must make you feel special. Veterans don’t even get that kind of guilt induced holiday. But society needs teachers more than veterans. Society probably feels that veterans have already been used up, but all you educators are still such juicy little morsels that people can throw into our American economy so we can pretend we’re not subsidizing child care for greedy companies (who pay parents, like me, such low wages). I’m sure Grizzly liked all the free babysitting you gave me. Don’t get me wrong. I know you guys do a lot of things, but let’s be honest about why y’all are considered essential workers.

But, all these things you do helped my son (and my family) make it through these last two years and got Skander to start talking. And, it’s not just you. It’s all of Mark Twain Elementary. It’s Ms. Richardson, his kindergarten teacher, and Mrs.Goodman the art teacher. It’s Mrs. Rhodes and Mrs. Wills who help him with his IEP. And Mr. B, who helps us with his stop sign in the mornings, as I drop Skander off each day. It’s everyone there.

You’ve all helped me communicate with my son and kept this city going through one of the worst pandemics in modern history. You guys are magical for how you adapted to these changes. And yet, magically, nothing ever changes for teachers and their wages. Don’t you just want to say ‘blah blah blah’ at how we all know this old story? I mean, it’s getting old to me.

But now I want to share a little magic of my own with you:

I’m not sure if Skander has told you, but we found out recently that half our family tree lived right here in Springfield. There’s a church cemetery north of town, called Mt. Comfort, which is basically a treasure trove of our DNA. I mean, if you think about all those dead bodies buried under there, which I try not to. But isn’t it amazing that we lived in a house, for over 2 years, that was a fifteen minute drive from that graveyard full of my dad’s ancestors?!

Skander and I don’t have my dad’s last name. My father’s name was Paul Reed, yet I took my mom’s last name of Barlow, because I never knew him growing up. Even though Skander and I have his Y chromosome, we were unaware that we descended from the Reeds in Springfield.

I’ve found a lot of colorful characters in our family tree, but my favorite Springfielder was Sherman Reed, a city firefighter, who was born in 1867.  Around the time Billy the Kid was being shot and killed, Sherman would have been a teenager when his family moved to Springfield. I first found the Reeds in the 1900 census records for Greene County, where Sherman’s dad lists himself as a blacksmith, working for the railroads. Sherman’s occupation was fireman. When I read old newspaper stories about him, Sherman talked about how he liked taking care of animals, particularly horses. You see. Back when Sherman was helping to keep everyone in town safe from fire, the people of Springfield weren’t sure about the new fangled fire engine they’d bought, so Sherman made sure that the horse drawn fire wagons were always ready to roll. Skander was the one to point out that the horses would have been scared of all that fire. We figure’d that Sherman must have been good at keeping the animals calm while putting out fires.

Sherman had a couple of kids (one of them my great grandfather), but got divorced before his kids were grown. I found him living in an apartment on College St. by himself when he was middle aged. I don’t know if you’ve ever read Harry Potter. If you have, then you may remember why Dumbledore always sent Harry back to the Dursleys each year.

I find it strange that most people don’t talk more about how cruel it was to send him back to those muggles every summer, but the old wizard explained to Professor McGonagall one time that it was because of an old magic spell his mother had placed on him (which ended up giving him his scar). Dumbledore talked about how older magic (based on blood and bone) were basically keeping Harry safe from He Who Could Not Be Named, and Harry needed to be housed with his kin each year to keep it working. Petunia was the only one Harry had left with his mother’s blood, you see.

You might think I’m weird, but it feels magical that Sherman once lived a few blocks from where Skander was first tested at the Early Development Childhood center on College St., before I even knew my family had lived here a hundred years ago.

I’ve included an article I found about Sherman, right before he died. He was 70 years old and had worked all his life in Springfield without retiring. He’d never received a pension from the city for all his aid to others. After all that invaluable service, he literally had nothing to show for it. If you read between the lines of the strangely familiar editorial piece I’ve included, you realize that, at age 70, Sherman was still hanging out at the firehouse like an old dog. Too old to do anything, but no one wanted to take him off the payroll because they knew he would have nothing to live on.

Isn’t that great? Thanks Springfield!

What was this whole letter about? You might be thinking. Well. I don’t have any way of really thanking you. And I’m not going to bring you fattening doughnuts as a gift either (I’m not saying anything to offend; I just know most people added a few pounds over the last couple of years).

But. I just wanted you to know. From experience. That, maybe, someday – some great granddaughter of yours might end up in Springfield, needing help. And when that future descendant of yours does…. If there’s still magic left in Springfield…. Then there’ll be somebody who works for the city (and who doesn’t get paid enough) who will be there to help. Because they’re hard workers who care. I know that doesn’t do you any good right now, but if Sherman is any indication: it’s all you’re going to get. 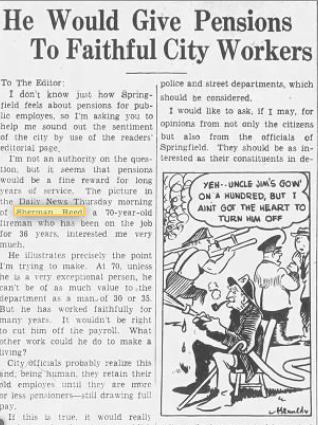 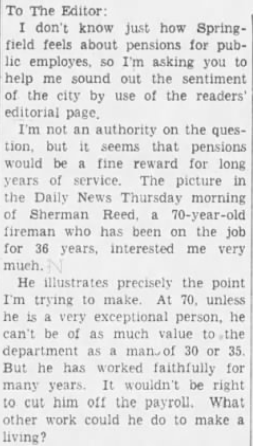 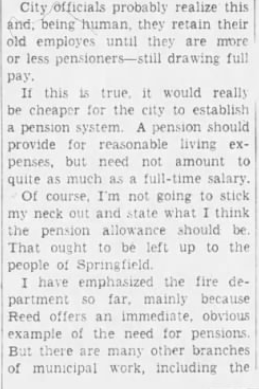 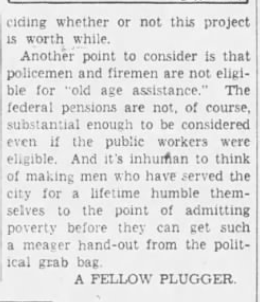