Are you worried that you can’t pay your bills, even though you have a job? Well… I just lost my job, and I’m worried how I’m going to pay my bills. But I pranked my employer on my way out! Enjoy!

So I work for a company…. Okay, let me start again. I worked for a company called Grizzly Industrial. It’s a pretty weird place. I got the job after my divorce, and Grizzly really kept me afloat through a tough custody/relocation case with my ex wife. Since parting ways with the company, I’ve since realized that Grizzly abused me and are still abusing my coworkers. I don’t want to get into all the specifics, and you can play all the tiny violins for me that you want. Since I have this platform, I thought I would show you how I pranked my employer on my way out. If you want to shame me for what I did, just know that I had already identified myself to Grizzly as a disgruntled worker. They were the ones foolish enough to let me have access to their computer programs all the way up until the end.

To give you the briefest of back stories: let me just say that over a year ago, I pointed out that Grizzly was illegally rounding hours on all of our paychecks. I have no idea how long this was going on before I worked there, but it only affected a few of my paychecks until I pointed it out. I was happy when they reviewed my concerns with their legal team and stopped rounding the hours. It’s more complicated than what I’m writing here, but the main thing was that they stopped breaking the law. They didn’t offer to pay people back what they owed them (and I think that’s smart, because they would be admitting they did something wrong) and they’ve been just hoping no one would notice. I let it go, and never even told a single coworker about it.

Fast forward to over a year later. I still have said nothing, but I’m still poor. I still can’t afford health insurance on my wages. Unfortunately for me, I got a back injury and missed 3-4 days of work because of it. I asked Grizzly if they’d “help” buy me a chair since I work from home now and pay for everything (it’s even my own computer I use for work) and I insult an HR agent while I do it. There’s more to it, but I think that’s where I can leave that part of the story for now (I know I shouldn’t have been snarky, but I’m an asshole). I didn’t think I was being that rude, but sometimes people mistake honesty for insults. Whatever.

After that, I find myself on 2 final warnings: 1) for attendance (regarding the time off for my back, like I mentioned), and 2) for a call I was on where I was recorded telling my mom to go get my son from school, because I was at the end of my shift, and it was on a long order. My customer knew he had a long order, so he offered to let me go. I took his offer, after saving his order, and went to get my son on time. Grizzly has me on a recording: guilty of what’s called Call Avoidance (and it’s a call center thing, so don’t worry if you don’t understand why they want to fire me). Anyway, long story short: I think I was retaliated against. Maybe I’m crazy, and it didn’t happen that way. Fine.

Here’s how I got back at Grizzly before I officially left. I’ve since scrubbed my computer, so I can’t give you a screenshot, but Grizzly used Microsoft Teams to take care of daily communications. We all used it daily. It’s a horrible software, but it let’s you send text chats to each other. Grizzly uses it for everything from Zoom-type meetings to company announcements. Now Grizzly isn’t really computer savvy, but a lot of their official channels on Teams wouldn’t allow me to Post (at least someone was smart enough to set admin restrictions on a few channels). However, I found a couple of company-wide channels which HR people had used in the past. They didn’t know they had left a permission open which allowed a guest to begin a “conversation”.

If I am correct, then I was able to post a “Company Announcement” that went to every employee at Grizzly. If it didn’t, I was still able to send out an identical message to a small group of supervisors and coworkers. And maybe that was enough to get the joke to the people who needed the information: as well as rate this prank as a pretty successful burn.

Before I post what I sent on the company channels, I just want to say that I wish I had done it sooner. I wish I hadn’t waited until I was already fired. I wish I hadn’t been such a wimp and had stood up a little taller. I should have had more integrity than that and told my coworkers they were entitled to back pay from Grizzly. Judge me how you wish. I am open to any criticism at this point. Go ahead.

Grizzly is happy to announce a new program which could help pay some unexpected bills. With this recent cold snap, you might be expecting a larger than normal Utility bill on your upcoming monthly budget. Don’t worry Grizzly can help.

To qualify, you would have had to have been employed by Grizzly well before January 9, 2020. To be clear, if you were hired after that date you are SOL. For all other employees reading this message (who qualify), you can simply refer to a statement communicated by Juan Hernandez on that same day of 1/9/2020. The statement marks the day that Grizzly stopped performing illegal rounding practices when it came to processing employee time cards. To put it simply, if you clocked out past your scheduled shift, Grizzly shorted you on payable minutes on your timecard, and you actually felt this in your wallet, There are digital copies of these rounded minutes and Grizzly could be audited to provide such records.

If you are confused, just imagine that for a small amount of minutes that you work past your shift (like 1 minute or 3 minutes), Grizzly would round those minutes down on your timecard, to ease the challenging process of performing payroll (they would have you believe). However, the really blatant violation of the rounding practice comes evident when Grizzly has you “burn” any higher amounts of overtime. Like 8 minutes or even 10 minutes or more. When you stack the deck so clearly for an average to slant in one direction, you defeat the purpose of the law which sought to make sure that businesses (who have REAL handicaps when processing time cards) should always manage to round up to 10 minutes just as much as they round down. So over the course of a month or year, the average pay you get following this “fair” practice, you basically break even if you get what I’m saying.

If you were to add up all the money that Grizzly shorted it’s employees before it changed it’s practices starting in 2020, it could theoretically be a vast sum. This would attract any lawyer to represent a large number of employees who might band together to file a legal case against Grizzly. Said lawyer would be happy to represent such a group of underpaid employees for free, up until settlement. You would just have to organize and seek legal counsel.

Don’t underestimate the position of power and integrity that you sit in right now. If you’ve been paying attention to current news you would know that social media provides workers with an outlet for their claims against their employers. However, be warned, it’s not without risk of retaliation. But if Grizzly wants to believe they can win a legal case in court, then they are ignoring what the power of one Tweet can do in this day and age of Cancel Culture. Grizzly might be able avoid paying you for all those rounded minutes before January 9th 2020, but if a customer read a news story about it, would they still buy Grizzly? Would it make the story more interesting if Grizzly took PPP loans while also having a record volume of sales during the Pandemic? FInd out if you are qualified.

Further disqualifying conditions are as follows: 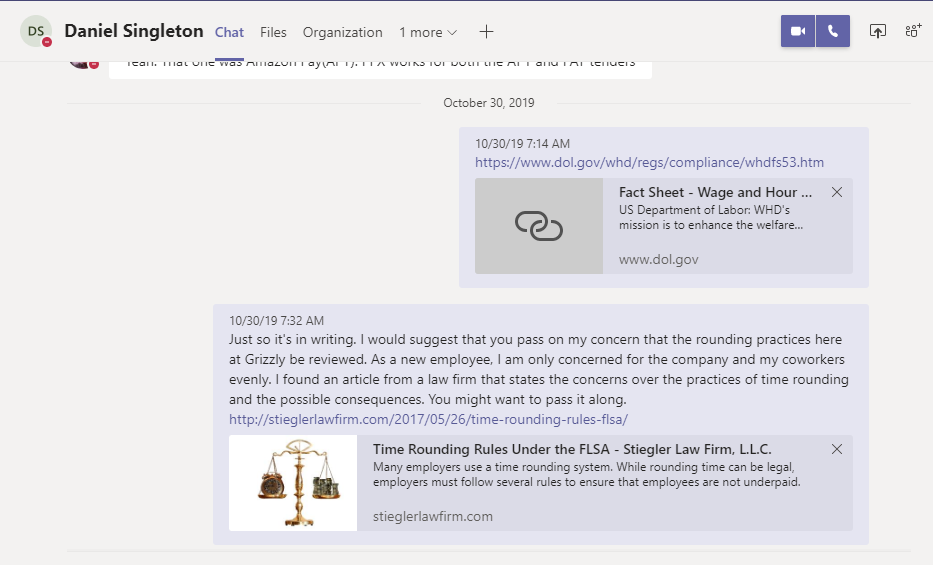 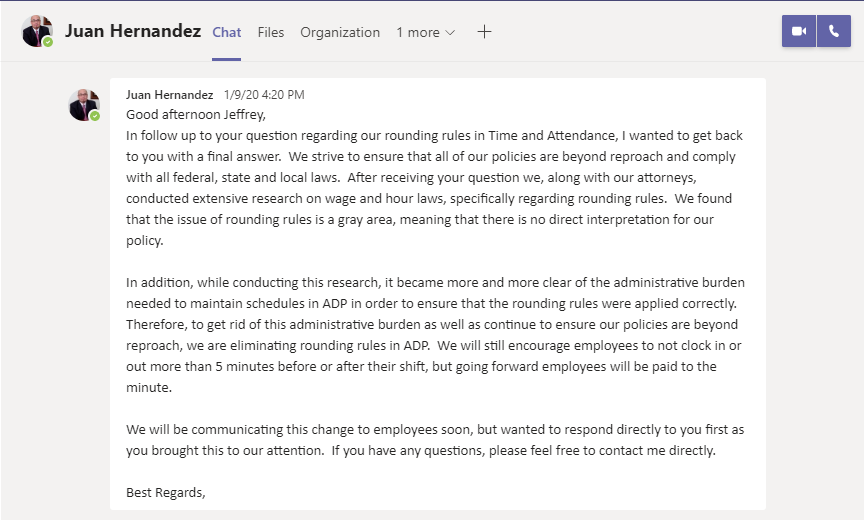 If you want to know why I’m posting this on my Dad Blog that I haven’t touched in a year, it’s because I’m still scared of Grizzly. They were able to terrorize me by using my job against me. Do you know how scary it is to think about finding a new job during a pandemic? If you’re scared enough, you might put up with all kinds of things. I might be a drama queen, and I can minimize my own experience by myself (thank you very much). But if you are experiencing something that is WRONG. Don’t let anyone tell you, “that you are over-reacting”. Take care of yourself and stop trying to be nice to other people. If you are worried you’re an asshole, than just make your problem into a prank instead. Have fun! Love you.